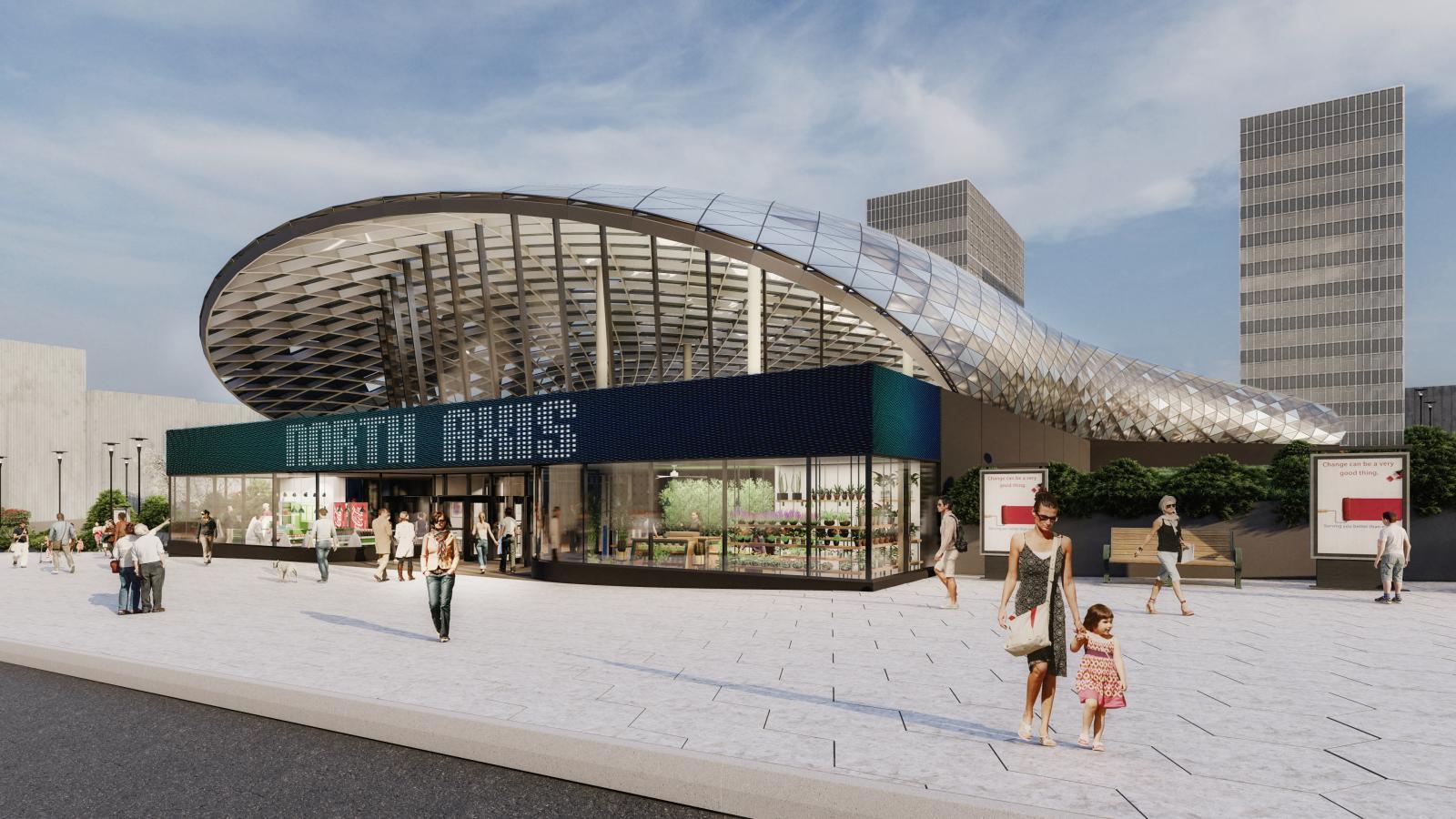 1. General information. Construction of a multifunctional shopping and entertainment, business, recreational and gastronomic center with a total area of ​​4975 sq.m. on the site of the existing “Arabkir” store at the address: Yerevan, Arabkir community, Komitas avenue 49/9.

2. Natural and climatic conditions Architectural and construction solutions are provided for the following conditions: The considered territory is in a dry desert strip; Dry, hot summers last more than 4 months; The average monthly temperature in August is 22-26 degrees, and the maximum – 41.4 degrees; In summer, mountain winds form, sometimes reaching 15-20 m / s in the afternoon: The winter is moderately cold, static snow cover is not formed every year. In January, the average monthly temperature is from -4 to -6 degrees, and the minimum reaches -31: Thus, the absolute maximum and minimum temperatures are respectively 41.0 C o (August) and -31 C o (January): The winds are mostly weak.

The territory is located in the northern part of the capital Yerevan at the altitude of 1181-1187 m above sea level. The average annual air temperature is 11.5 Co: Dry climate is determined in the summer by the penetration of dry overheated air masses, and in winter by the northern cold air masses, which are cooled even more under subsequent anticyclone weather conditions. In spring, rainfall is 141 mm, in summer – 53 mm, in autumn – 72 mm, in winter – 87 mm: The amount of precipitation during the year is 353 mm. Relative humidity ranges from 49% to 53% in the summer, 73% -77% in the winter, 53% -61% in the spring and 51% in the autumn, 70%. The average annual relative humidity is 61%:

The preferred wind direction is northeast. In winter, there are often completely calm or light winds, which contribute to the stagnation of cold air in the cavity. According to the observations, the calm weather during the year is 37%: Direct sun rays during the year are 161.4 kW / cm2, the maximum was recorded in June – 21.4 kW / cm2, and the minimum in December – 4.6 kW / cm2: Diffuse irradiation is 25.1%; urban conditions (air pollution, color of buildings, roofs) significantly affect the albedo, thereby increasing or decreasing the effect. The absolute sum of the annual radiation balance is 69 kW / cm2, the maximum was observed in July 10-12 kW / cm2, and the minimum in December – 0.5 kW / cm2։ The duration of sunshine on average is 2600 hours, the maximum reaches 2800 hours.

In summer, the ground surface heats up to 50 Co, and in some cases reaches 60 Co: In winter, on average, the soil freezes to a depth of 2-25 cm. In some years, it can freeze up to 45 cm. In summer, the earth is very dry and covered with cracks. In such conditions, growing plants without artificial irrigation is almost impossible. The soil is rocky and semi-rocky.

3. Historical town-planning essay. The projected building is located in the Arabkir community of Yerevan. Initially, Arabkir was a separate settlement, for which Alexander Tamanyan developed a master plan in 1929. In this regard, Arabkir is represented as a separate, consisting of separate mansions, urban planning unit and is located in the central part of the modern district, with its center, surrounded by trees of the circular park. This settlement was connected with Yerevan by three streets. Subsequently, urban planning documents were developed within the general plan of Yerevan and were associated with other areas of the city plan.

In 1938 Special ideas of the general plan were: • Connection of Baghramyan street with Cheryomushki through the bridge • Creation of an extensive green belt along the entire length of the railway • Highlighting the north axis through which the green belt connects to the gorge system In 1972 in the general plan: • The idea of ​​the North Axis is becoming more explicit. A community center is added here (see: Squares on the north axis, volumetric-spatial dominants, monuments, and implementation time p. 33) • The northern axis in this section is emphasized by an alley that starts from four research high-rises and reaches Nairi Zaryan Street. From the point of view of urban practicality, the belt is the green axis that connects Komitas Avenue with Nairi Zaryan Street and a green recreational environment for the community. According to the current project of zoning of the Arabkir community ՝ the priority immediate tasks of the community are the creation of public and green objects:

4. Architectural solutions Within the framework of this project, we are dealing with a segment of the peak of the Northern axis, which is one of the most important starting points of the city. We are talking about tying the upper part with Komitas Avenue and the boulevard, as well as the territory in front of four research high-rise buildings. The idea of ​​the Northern axis is a turning point in terms of urban development of the city of Yerevan and the events taking place in the modern architecture of the capital of Armenia.

It is based on two main topics: Creation of a strong dominant axis with bright architecture, opening the South and serving as one of the main landmarks for Yerevan, which in its turn will take on the role of the “spine” assigned to it in the urban planning grid of the city, to which until the 19th century developed street network routes are like ribs attached or originated from here. In order to emphasize the intersection of the axis in the urban planning network with the unique architectural dominants and create a nodal hinged, connecting the urban environment (Buildings of the National Opera and Ballet Theater, the Tamanyan Square, the Cascade Complex, the Northern Avenue and Republic Square, the Yerevan keys, St. Grigor Lusavorich Yerevan Cathedral, Russia Cinema, the Yerevan railway station with the monument to David Sasuntsi, etc.)։

Thus, the authors of the project were faced with the task of creating an architecture that harmoniously entered into harmony with the urban planning idea of ​​the Northern Axis, as well as satisfying both the functional and aesthetic needs of the citizens. The image of the structure should fulfill two missions: 1. to satisfy all the requirements of modern multifunctional centers, their business and social functions; 2. the strength of its aesthetic and functional image will be the following: to contribute to the resuscitation of the idea of ​​the neighboring Arabkir boulevard and strive to emphasize this node of the Northern Ray. Volumetric, spatial, structural and other technological solutions are made in the spirit of parametric architecture and automated building technologies, which are characteristic to the architecture of the 21st century.

The use of such technologies allows you to freely work with surfaces of double curvature, apply forms with complex geometry and elements, work with digital parameters and “brush stroke, one stroke”, cover the entire area with a common shell with a large span and easily solve any planning problems under a single dome and technological challenges. This approach allows you to get an innovative, vibrant, strong and impressive image that harmoniously fits into the existing environment. Moreover, emphasizing social significance, the proposed concept contributes to the recognition of the area, the expansion of the urban environment, which has its own personality.

That is why the central part of the project is the design of the square and the garden. Thanks to festivals, concerts, the latter will create prospects for the development of tourism, agriculture, the organization of healthy nutrition for citizens and the expansion of production. In the long run, the park and the dome with their bright appearance can take on the role of a kind of catalyst in organizing a wide public services sector. The territory of the Arabkir department store, small retail outlets, as well as unused and unfinished structures that were designed and built in 2002 were dismantled in the spring of 2020, according to a new, approved master plan. All types of premises, service areas of the multifunctional center will be concentrated under one roof, providing a convenient environment for organizing pastimes, food outlets, exhibitions, retail outlets, as well as for organizing leisure and development areas for children and adolescents.

Analyzing the urban planning environment – mainly quadrangular, prism-shaped, vertical and horizontal structures, the authors considered it appropriate to confront, soften, glide the surface, apply a spherical spatial-volumetric composition of double curvature. The principles of contemporary parametric modeling used to create the above composition made it possible to create a modern and expressive, a single large stroke, well-organized both external and internal environment in the stylized form of a traditional Armenian dragon. The building rises above the hill, at the end of the Northern Ray becoming a kind of a symbol of the community of Arabkir and Yerevan as a whole. In the concept of the Northern axis, it is presented as a manifestation of the collective unconscious memory of the Armenian people, as a symbol of wisdom and strength, the legendary vital energy. The word “vishap” translates as “a dragon,” but the European dragon is a winged serpent that spews flames. Vishap in Armenian means “a big mythical fish or a snake.”

It is known that the “vishap” has been a totem of the Armenian people since the ancient times. The vishaps are common in the Armenian mythology. Vishaps were originally deities or water spirits depicted as fish. It is also known from history that during the reign of Tigran Yervanduni, a snake and a dragon / visap / were depicted on the Armenian banner. In the Sumerian pantheon, Ayia / Հայա / – the god of wisdom was also portrayed as a snake. Moses Khorenatsi calls the ancestors of the Armenians “վիշապազունք” /vishapazunq, i.e. the people of vishap/dragon. The layout of the structure is open. The presence of a second light allows you to provide daylight for the basement and semi-basement floors. The complex has one main entrance at the level of 4,650 from Komitas Avenue, two additional entrances from the top of the park from 0,000, one pedestrian working entrance and parking for cars, and one entrance from the north, from the research high-rise buildings and two emergency exits on the right and the left sides of each building.

The structural solutions: The existing structure consists of a monolithic reinforced-concrete frame, the maximum span is 9800 mm, the minimum – 5800 mm. The proposed design solutions are classified as hybrid, combined – that is, a reinforced concrete frame, active on the surface, which, both in shape and in vector, is an active long-span carrier system. The parametric wide-span coating is supposed to be implemented as a mesh system active on the vector and on the surface, based on the metal spatial mesh shell. The system is planned to be implemented from lightweight aluminum composite profiles. The dome is supposed to be implemented by the construction technologies known in modern parametric architecture. For its implementation, foreign colleagues will be invited.